Jay Clouse 0:00
The startup investment landscape is changing, and world class companies are being built outside of Silicon Valley. We find them, talk with them, and discuss the upside of investing in them. Welcome to Upside.

Jay Clouse 0:28
Hello Hello, hello, and welcome to this special episode of the Upside podcast, the first podcast finding upside outside of Silicon Valley. I’m Jay Clouse, and I’m accompanied by my co-host. Well, I went down the nickname route, Eric, we just talked about not having nicknames, and I was going to give you a nickname, but I hadn’t thought of a nickname, so I’m just gonna say Eric Hornung.

Jay Clouse 0:47
Swing and a miss. Eric, as we tend to do on national holidays here, we’re not going to release a full length regular interview, but today we’re going to have a talking heads episode commemorating Thanksgiving and talking about what we are thankful for this year on the Upside podcast.

Eric Hornung 1:06
And as always, Jay, we’re going to put this into a framework because Jay Clouse loves frameworks. That’s the important thing.

Jay Clouse 1:14
Yeah. Well, dear listener, if you know the history of the show a little bit, you know that Eric is the framework guy, but it is worth noting — because I love the attention — that this was my framework that I put forward today, a little special outline from the mind of Jay. It rhymes, thankful for that, that’s for sure.

Eric Hornung 1:33
Yeah, this isn’t the eyes and ears method, but it is related to Jay’s bowling skills and a little bit of a plan words.

Jay Clouse 1:39
You already got a gutter ball reference in there, which totally went over my head. Was that on purpose?

Jay Clouse 1:46
Wow, that was good. Today, we’re going to give you three things that we are grateful for at the Upside podcast. And why three, you may ask?

Eric Hornung 1:53
Because three strikes and you’re out.

Jay Clouse 1:55
Nope. Different sport. Three because if you’ve ever been bowling, you know that Three strikes…Oh wait, strikes are in bowling too, but you’re not out. Oh man, you’re just you’re two steps ahead of me on these sports analogies today. In bowling, three strikes is a turkey. And this is our special turkey day episode. So Eric, our first thing to be thankful for, what is it?

Eric Hornung 2:19
Let’s do all three real quick. We’ll run through them and then we’ll jump in. So we got three things. Make it a real quick. One is you, two is this, and three is us. And then we’ll be out of here and out of your ear buds. So let’s jump into the first one Jay, which is you and not you, Jay Clouse, but you the listener, who’s listening right now. Without you all, we couldn’t do this podcast.

Jay Clouse 2:43
Your support drives us and makes it fun to the show. We love hearing from you on Twitter @upsidefm, over email. We get tweets and emails every week from listeners of the show. Some people are pitching to be on the show, some people giving us notes on the show. We’d love to hear feedback. We will do another feedback episode in the future. And on that point, we really want to hear some more feedback and learn a little bit more about you. You may have heard us talking about this for a few weeks, but there’s still time and we still need your input. If you could go to upside.fm/survey, we’re running a listener survey to learn more about you so we can better create the show. Find good partners and advertisers for the show, and honestly, Eric, as you and I have bemoaned several times, podcasts analytics aren’t great. We just want to know a little bit more about the listeners of the show. So go to upside.fm/survey, let us know, it’ll take you less than three minutes to complete. And we really appreciate you doing so.

Eric Hornung 3:43
Maybe do that. Drop us a little note on Twitter and we’ll give you a quick shout out on the upside Twitter feed. So looking at number two, Jay this the ominous this What am I talking about there? Well, let me tell you. It’s this movement. It doesn’t have a name, but we call it Outside Silicon Valley, some people call it the No-Coast. Some people call it Between the Mountains, some people call it well, the Middle Bit, which I don’t actually know if that’s actually what they call it or it’s just related to something else. But there’s also this whole Rise of the Rest concept. And it’s all pointing to the same thing, which is that entrepreneurship can happen anywhere in the United States, not just in key demographics. And lately, within this last year, it feels like there has been a lot of awareness on this.

Jay Clouse 4:27
There are a lot more people looking inward looking outward from Silicon Valley. They’re saying, Wow, there’s some really cool stuff and really cool companies and founders starting businesses all over the country. We see people boomeranging back from the valley to their hometowns, we see thriving startup cultures all around the country. And now people are starting to cover it a little bit more. And thankful that we’re a part of that movement here for the last year and a half, covering the stories of these founders and these companies here across the country. Thankful that there’s more resources as well, some of which we’re creating, some of which others are creating. Eric, what are some of your favorite resources that we’re seeing popping up here to support this movement?

Eric Hornung 5:05
Yeah, so if you guys haven’t been on Middle Bit yet, it was launched by Ben Miln of Dwolla up in Des Moines, Iowa. It’s a forum, it’s a virtual coffee shop. Think about it like Hacker News for people outside of Silicon Valley. If you don’t subscribe to ExCoastal by Evan Longren, you should check that out. And the other great newsletter…Well, there’s a couple of great newsletters, Jay. Austin Woods of Lewis and Clark Ventures puts together Tech Between the Coasts, which also has a report. Our friends over at Midwest Startups and M25 put together the yearly ecosystem rankings on best startup cities. Man, there’s just so much that’s coming out, and I’m probably missing a ton. Oh, our friends at Powder Keg.

Jay Clouse 5:46
Yep, friends at Powder Keg with their tech census and all of their written and audio content. Midwest Startups team also puts out a weekly recap on SubStack of the Middle Bit forums you we’re talking about. Awareness is growing, and we’re thankful for that. Eric, that brings us to our third and final topic of gratitude here. And that is us.

Eric Hornung 6:08
Yeah. So it’s cool when there’s growing awareness of a trend, but sometimes that means that the people that are taking part in the trend get a little bit of individual recognition. So let us be a little self-promotional and a little selfish and extremely thankful for both being named to another podcast list this year, which is Business Insider’s top 24 podcasts that are almost as good as getting an MBA, saving you guys 10s of thousands of dollars by just listening to Jay and I apparently.

Jay Clouse 6:36
Not too bad for a couple of guys who don’t have MBAs.

Jay Clouse 6:47
We were also named 2020 CES Media Trailblazers, meaning that we will be back at CES this January, interviewing more founders, companiess, [robably even some members of the CES team and some of the more emerging trends major stories at CES, because we’re going to be given a lot of special access and maybe even a little preferential treatment, Eric, which I certainly don’t mind.

Eric Hornung 7:13
It might not be a Lamborghini chair this year though.

Eric Hornung 7:27
In both of those instances. We’ve been named along some really big names in the space that we look up to for inspiration.

Jay Clouse 7:33
And Eric, don’t forget that we are returning to South by Southwest this year, as well, for a panel that was voted on by our listeners. Thanks again for your support in the South by Southwest panel pickers. We are hosting a panel called Connecting Startups Across the Country, which will be a discussion between myself, Victor from M25, Andre Folks from our friends at StartCo, and Ali Phoenix, from Embark Collective. Extremely thankful to be back at South by Southwest this year. If you are going to be at either CES or South by Southwest, you should tweet at us or email us and let us know that you’ll be there. We’ll be happy to meet up and learn more about what you’re working on.

Eric Hornung 8:09
And with all of these, we are sitting alongside people and entities and organizations and podcasts that we look to as inspiration when we were starting this podcast. So I think this circles all the way back to our first strike, which is you, the listener. We couldn’t do any of this without you. And we really appreciate you tuning in every week here on Upside.

Jay Clouse 8:33
Enjoy the holiday with your family or your friends or whoever you’re with, and we’ll talk to you next week.

This Turkey Day, we want to take the time to express our gratitude. We are so thankful for you, our listeners, for the startup movement happening between the coasts, and for the success that this podcast has had. As a gentle reminder, please check out the listener survey if you have a few minutes to spare. Enjoy your Thanksgivings, and see you next week! 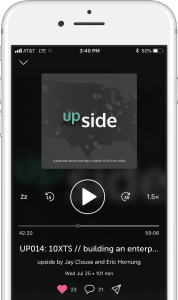